Have you ever been trying to reverse a specific function in an application, but cannot really find it? For instance, let us assume you want to locate the code that is being called right after a click on a button or a keystroke. With certain applications (Delphi, CBuilder, Visual Basic, etc) it is as easy as dropping the executable inside a decompiler and locating the corresponding events/addresses in a matter of seconds. Sometimes it is not that easy, whether a packer or anti-decompiler technique is involved, or just for the simple reason that the application is not an event-driven one. What can you do in that case to obtain those addresses in a similar approach with the least effort?

Let us take a look at a sample crackme for demonstration purposes. In this case we have a simple executable coded in Visual C++:

If we try to enter a text and click on the Check! button nothing is happening, not a text message, no nothing. At this point we could get creative and start looking for other alternatives to locate the exact location where our serial is processed and yes, we would probably succeed, but what if I tell you that there is an easier way for us to land just after the press of that button? Just like we would with any Delphi, Visual Basic or any other event-driven language? Let us find out how it works.

After loading and executing the file in x64dbg, we go and enter some text and just before pressing the Check! button we go to the Handles tab and refresh the view to obtain a window list of the debuggee. We can then see the button there so we right click over it and select the option to set a message breakpoint on it:

Now we are given a window with some options to choose from in order to set a specific message breakpoint in our button control. In this case the configuration I am going to use is something like this: 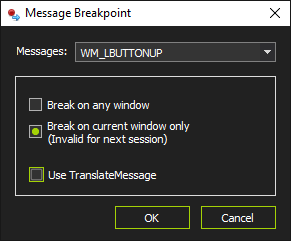 We are specifying that the execution is stopping as soon as a WM_LBUTTONUP (left mouse click is up) message is sent to our button control. Right after our breakpoint is set we click the button in the crackme and soon after that we step in our breakpoint.

At this point we achieved what we wanted. We just stopped the execution right after the button click, on the other hand we are in user32.dll and our purpose is to be in the main module code. Getting there is as simple as just using a breakpoint in the code section of our executable. You can also use the Run to user code option (Ctrl+F9).

When trying to resume the execution, the debugger is going to stop the execution once again, but this time right in the middle of the code we were looking for. In this case in the DLGPROC function (the callback in charge of processing the messages being sent to every window control in the main window dialog). 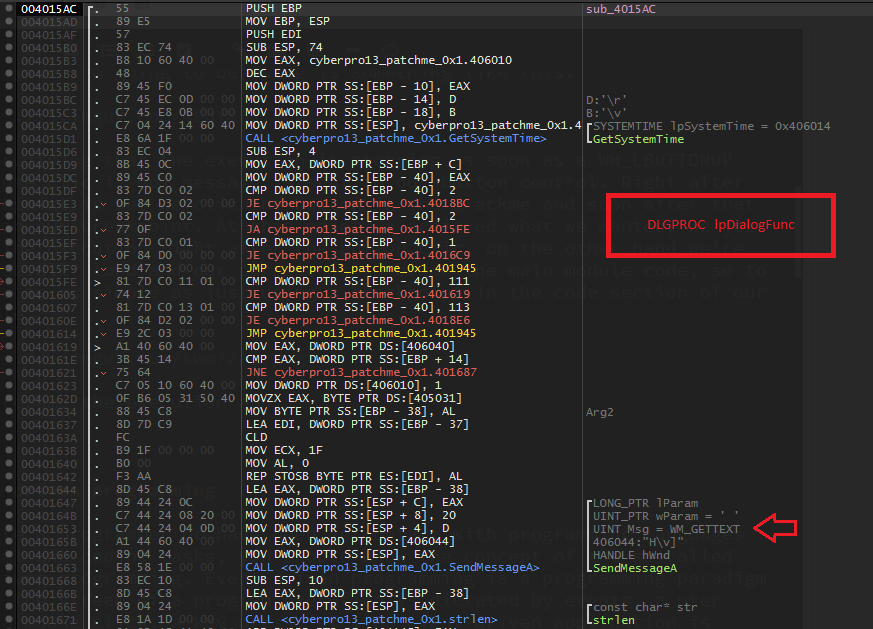 Even if a programmer is not using one of the above languages or even if they are using them in a non event-driven manner, Microsoft Windows applications are event-driven by nature, which means that you are going to be dealing with window messages anyway. According to the MSDN:

According to the previous information, in order to intercept window messages for a certain window, we need to first locate the window procedure of the desired “control”. To so do from the application that contains the window procedure is quite easy, it can be located by using the following functions:

lpfnWndProc: A pointer to the window procedure.

At this point everything looks very straightforward, but nonetheless, there is one limitation imposed by our OS: Microsoft Windows will not let you get this information from an external application (such as a debugger). If you want to get the window procedure address of a given window or control that is owned by another process using one of the above functions, you will end up with an ACCESS_VIOLATION exception. In our case x64dbg will be no different and hence none of the previous functions will work properly…well…yes and no. Here comes the workaround used by x64dbg to get the correct window procedure address.

At this point it is not clear why this behavior occurs and whether it is OS bug. The thing is, that it can be used in all previous Windows versions. The important function here is:

The hack relies on testing for the given window’s charset before calling the correct function version of GetClassLong (ANSI/UNICODE) accordingly. The code used by x64dbg is something as simple as this:

To write code that is compatible with both 32-bit and 64-bit versions of Windows, you have to use GetClassLongPtr. When compiling for 32-bit Windows, GetClassLongPtr is defined as a call to the usual GetClassLong function.

As we can see the structure give us some useful information at this point, most importantly hwnd and message. According to these fields we could know to which specific control what message is being sent to. Before going any further let us see an example for an specific message (WM_LBUTTONUP) being sent to a given Button control. 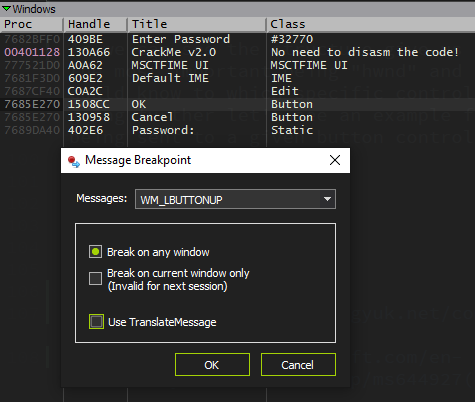 The last thing to get this feature fully working is the possibility to pause the application only when specifics handles and messages are in play. As you can read in the help, x64dbg integrates a very nice and powerful set of expressions to allow this. As shown in the above picture there are three options involved:

As seen the function uses the same MSG structure that we saw before, hence the functioning with the expressions will be more of the same with some minor changes depending on the OS platform:

As seen in this post, this is a very convenient and strong feature in x64dbg and can be used in numerous scenarios. Having the possibility to control on which events to pause a debuggee, even if it is not and event-driven application like a Delphi or Visual Basic, open the doors and give the reverser even more resources to debug. If you want to pause the execution when entering a char in an Edit control in a MASM application just set a messages breakpoint on the control itself with the message WM_KEYUP, simple as that. Same goes for Button clicks, showing windows, etc. There are a whole bunch of messages options to choose from.

With these lines I tried to give an in-depth view of the messages breakpoints feature and some of the multiple scenarios where and how to use it. And this is all for this post, see ya around.