In a recent post about the architecture of x64dbg there was a comment to explain the “little bit of a mess” that is the threading model of x64dbg. It is indeed not particularly pretty, but everything has a purpose.

The first thread of interest is the command thread. This thread is created during the initialization phase and it infinitely waits and executes commands that are given to it through the so-called CommandProvider. In the very first version of x64dbg the command thread was the main thread and since the introduction of the GUI this has been moved to a separate thread in favor of the GUI thread.

The debug thread runs the TitanEngine debug loop. It still works the same as two years ago:

Here is a simplified version of the cbDebugRun command callback (running on the command thread):

Here is a simple diagram giving you an overview of what’s going on with the basic threads. 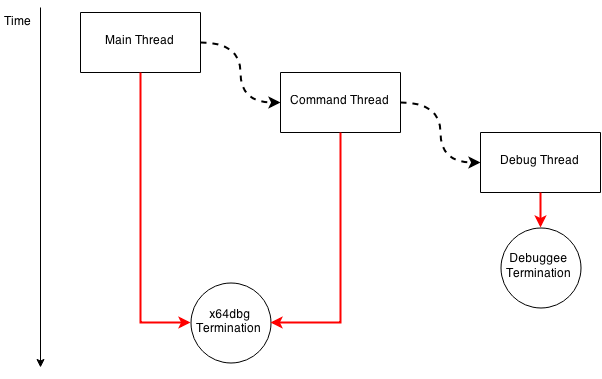 Some challenging areas are properly signaling the termination of the debuggee. Issues #303, #323 and #438 were, with the great help and patience of wk-952, fixed and this signaling appears to be working now!

When dealing with scripting, you usually want to simulate user interaction. This means that the expectation is that the following x64dbgpy (Python) script should be equivalent to:

There has to be some sort of synchronization at the end of debug.Run and debug.StepOut to make sure the debuggee is paused before the next command is executed. The implementation for this is in _plugin_waituntilpaused and looks like this:

The implementation of dbgisrunning is a check if lock(WAITID_RUN) has been called.

There are various threads that just do periodic background work. These include:

Other threads are triggered once to fulfill a specific purpose. These include:

For interaction with the GUI, performance is very important. For this purpose jdavidberger has implemented TaskThread. It’s some variadic templates that basically allow you to trigger an arbitrary function from a different thread to then quickly return to the real work.

The actual thread runs in an infinite loop, waiting for the TaskThread instance to receive a WakeUp (trigger). Once awake, the specified function is executed and after that the thread is being delayed for a configurable amount of time. This ignores all triggers (except the last one) within the delay time to avoid unnecessary work.

As an example, here is the declaration and wake of the thread that updates the call stack (an expensive operation in some cases):

Having a different thread handle expensive operations is critial to a responsive interface. Lots of information is rarely looked at (memory map, call stack, SEH information) and can suffer a little delay (100ms) before being updated. This is the same with the current state of the disassembly. When holding F7 to quickly step a little you don’t need perfect accuracy, as long as the disassembly lands on the correct state within reasonable time after releasing the step button.

The most important (and the most annoying) thread is the Qt GUI thread. If you want to know more, check out the Qt Threading Basics for a 6 page introduction on how it works.