This is the third of (hopefully) many weekly digests. Basically it will highlight the things that happened to x64dbg and related projects during the week before.

Issue #462 has finally been fixed/worked around. Since DbgHelp is not thread-safe we created a wrapper around it that uses a critical section to make sure no bad things happen. The problem is that this would deadlock if inside SymLoadModule64 (downloading symbols). The solution is to not use the thread-safe version for downloading symbols.

Pull request #1046 by genuine added the Follow in Dump N context menu in the registers view: 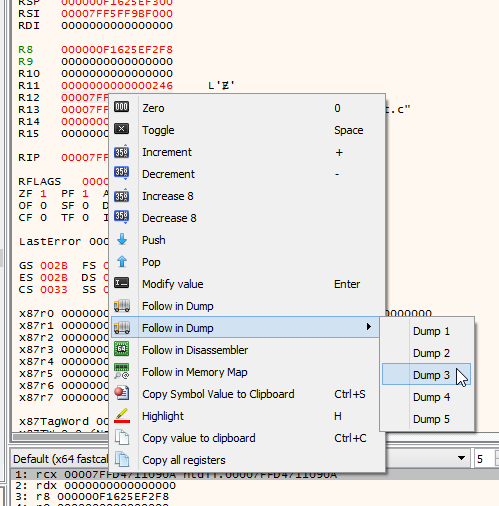 The DLL breakpoints from the LibrarianSetBreakPoint command now have a GUI.

You can now configure shortcuts for animation commands.

As you might have noticed, x64dbg has/had lots of issue with single step performance. If you held down F7 it would consume lots of CPU and step with a staggering 7 events/s in some cases. This turned out to be a repaint() instead of update() call in the registers view, which caused the registers view be repainted immediately, holding up the rest of the GUI pipeline. You can now consistently get up to 30 events/s when holding down F7 (which is close to the repeat limit of holding down the key).

There have been huge performance improvements in the script engine as well. Before there were around 2 events/s and this has been optimized to around 500 events/s for small scripts. Take the following script as an example:

The commands are stored as a linked list (legacy, don’t ask) and resolving them is quite costly. This has been slightly fixed by optimizing the way aliases are stored, but still requires a rewrite to be optimal.

The commands that are not actually commands (numsteps = 0 and numsteps++) are attempted to be resolved as expressions. The problem with this was that symbols and labels had priority over variables, so there were two O(n) operations before attempting to resolve the variable which can make things slow (especially because the complexity in SymFromName is undefined). There is an option in the expression parser called baseonly that only resolves cheap things (ignoring symbols and labels) and enabling this for assignment expressions sped up this script to around 500 events/s.

The expression resolver now no longer maps the entire module when trying to resolve a module address, this also considerably improved performance.

Someone complained that VS15 does not build x64dbg. While VS15 is not officially supported, the build errors have been fixed anyway.

You can now use GetTickCount() inside your expressions if you want to for some reason.

Fixed a crash with history

If you were stepping while the context history (undo command feature) was being cleared there would be a race condition and a crash.

More icons in the GUI

In issue #775, mrfearless kindly provided us with lots of new icons, various have been added, but please help with adding more that you see are still missing.

A new assembler engine has been added to x64dbg. You can find it on Github. Big thanks to the author kobalicek for the support while trying to get it work!

Fixed a deadlock on aborting a script

If you ran the following simple script it would spin out of control and eventually hang when attempting to abort the script:

The fix from issue #985 has been implemented and sorting is now consistent even with equal strings.

Issue #929 has been fixed, you can now properly follow the WOW64 redirections in x32dbg.

Quite recently a feature was introduced where breakpoints would not be automatically placed if their original bytes don’t match the bytes in memory. This was to prevent weird crashes in the debuggee, there has now been an option added to restore the old behavior. 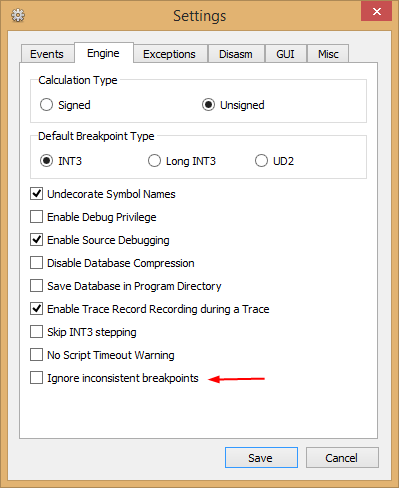 FAQ in the attach dialog

Over time, many people have come in contact to ask why processes don’t show up in the attach dialog. There has now been a link added to the FAQ that will gladly explain it to you. 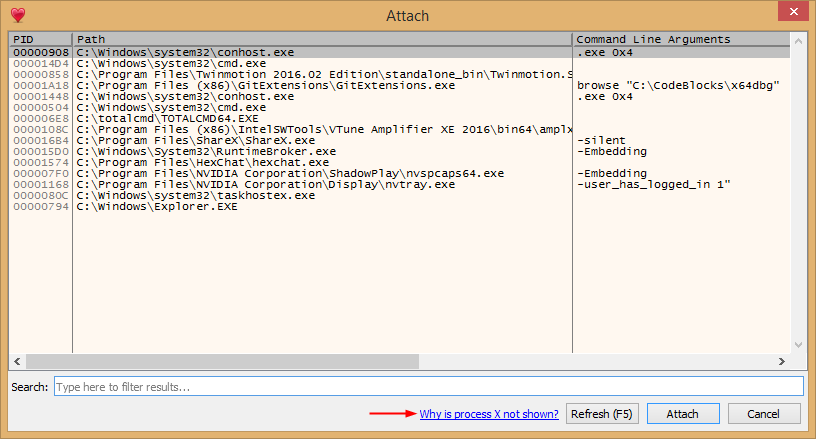 When pressing the assemble context menu option in the disassembly the text of the currently selected instruction will be filled in. Capstone outputs RIP-relative addressed instructions and various people have complained about this so far and it will now show normal addresses.

Various dialogs were set as a fixed size and this would cause truncation of controls when translated to a language that has longer text. The dialogs will now scale with the content.

Allow ESC and Backspace to be used for shortcuts

You can now register ESC and/or backspace as a shortcut, so you could for example make pressing ESC switch to the CPU tab if you want.

You can now use the command bar to manually change the type of an address (db/dw/dd/dq commands). See the data section in the help for more information.

An option has been added to import a settings file. This can be useful if you want to share your color schemes and/or other settings with your friends.

Previously x64dbg allowed you to ‘display’ a reserved memory page. Since there cannot be read you would just see a page full of zeroes. It will now just not show them anymore.

The animation will now stop if the command failed (quite useful if you animated an invalid command per accident as it would just continue animation). You can now also always stop animation by pressing the pause button.

If your filesystem is really clogged x64dbg will no longer hang on startup. It will instead do initial file read operations on a separate thread.

The run to user code implementation has been reported as not working and it has been replaced with the conditional tracing command:

You can still use the old RunToUserCode if you liked it. You can also bind it to a hotkey if you desire to fully restore the old behavior.

The hex edit dialog now has an extra textbox that automatically encodes/decodes in the last selected code page. 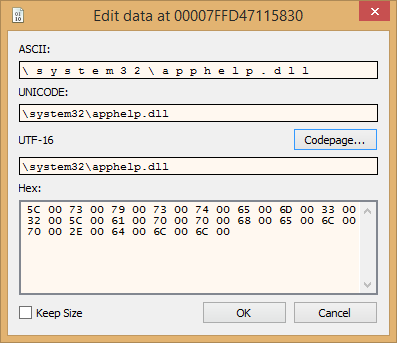 When using an initialization script that did debug operations it would lock the GUI, this has been fixed.

Fixed the copy menu in the handles view

You can now copy handle-related values again! Sadly I discovered this in a critical situation which required me to manually type over a 40 character base64 string…

As many people (not) know, x64dbg allows you to highlight tokens. Press H (old config files might have Ctrl+H) and click the token you want to highlight. In addition to this 2 year old option you can now right-click on a token to highlight and interact with the token. For now only copy operations have been implemented, but there is more to come.

You can now copy data in various formats from the disassembly view. 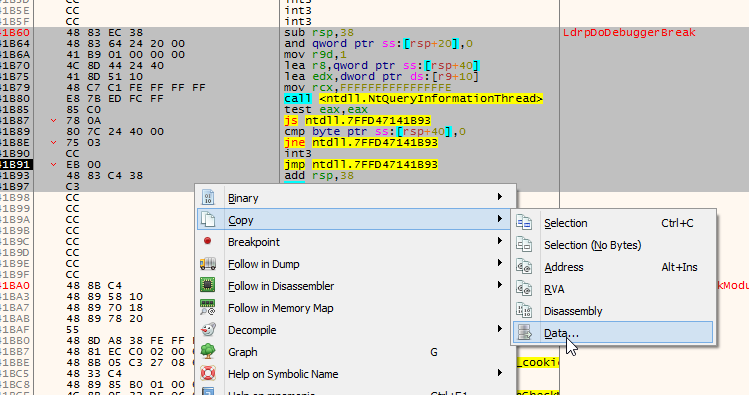 Added dummy menu for “save file”

Some people couldn’t find the option to save patches to a file, so a dummy menu has been added that will open the patch dialog (where you press Patch file to save your changes to disk). 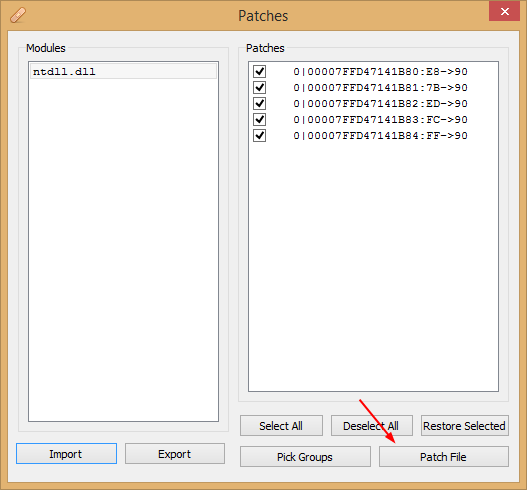 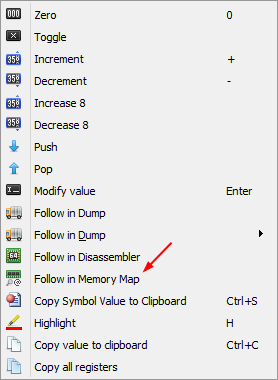 Your preference for enabling/disabling the branch destination preview will now be saved in the settings.

Addresses can now be clicked in the log view to follow them in the dump/disassembly (depending on the type of memory).

Update checker has been fixed

Since the old Jenkins server was taken down the update checker did not function anymore. It has since been fixed and it uses the Github API to check the latest release. No more excuses to not update every day! 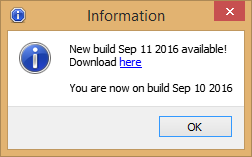 The script-like plugins that you can execute with the scriptdll command have been fixed. For an example, see UpxUnpacker.cpp.

Setting to not call SetForegroundWindow

There is an option to disable calling SetForegroundWindow on step/pause events. This can be useful if you want to do some scripting in the background and not be disturbed by infinite flickering windows.

There has been a new type of splitter control introduced by torusrxxx, it allow you to detach the breakpoint views for now, but perhaps it will be used by other views in the future as well.

Execute a script from the clipboard

You can now ‘paste’ a script directly from the clipboard and execute it. Quite useful if you want to copy a script from the web.

Fixed a weird bug with DLLs that are loaded multiple times

Issue #1064 showed some very weird behavior with certain mixed .NET applications. Modules were loaded multiple times and this confused x64dbg. This has now been ‘fixed’ and you can browse the memory as usual.

You can now copy IPv4 and IPv6 addresses from the data copy dialog. 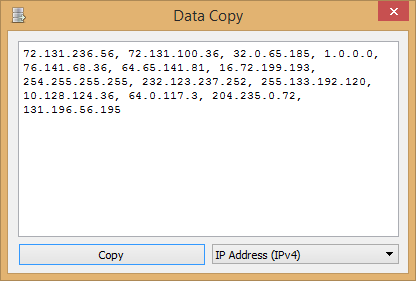 There is now an option to disable scrolling in the log.